Oh dear gawd, where do these people come from. Apparently, in this case, from a gift shop in the bowels of the Landmark Inn in Thunder Bay. It comes in the form of Tamara Johnson who could only be described as the Ann Coulter of Thunder Bay. Maybe a female version of Ezra Levant, the Sun News shit disturber that plays on extreme racial stereotypes to push forth far right ideas, with knee jerk, over the top reactionary rhetoric designed not to inform or make the world better, but simply to shock and piss people off. It's like a drug to folks like this. They seem to thrive on pissing people off, hurting people deeply, causing grief and just generally being ignorant pain in the asses. They accomplish little with their time in the spotlight other than that, really, and they have too much of an ego to see that what they are doing is completely unproductive.

So, this Tamara Johnson woman ran in the recent Ontario election in the riding of Thunder Bay- Superior North representing the Ontario Libertarian Party. Red flag? Indeed. As part of her campaign, just a few days prior to the election she put out a full page ad in the Chronicle Journal featuring her in some kind of a weird pose, looking like a cross between a high school kid trying to look sophisticated and a sophisticated lady looking like a high school kid. But, next to this rather odd image were a pile of words that caused a stir and for good reason. 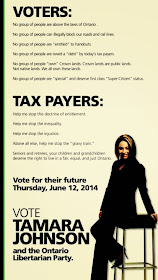 Okay, wow, it sounds like Ontario has been taken over by money grubbing, ivory tower living, oppressive, ultra elite, ultra rich, super advantaged First Nations folks who have victimized poor Tamara to the point of tears. No wonder Ontario needs her! Only she can fight the unfair treatment that regular tax payers are facing as the result of the demands of Ontario's super citizen natives! She is the great white saviour for....whites.

Now, I don't love jumping up and down and crying racist. But when the term is due, it's due. And here we have a textbook case of a racist. This is racism defined. The amount of ignorance crammed into the cheesy looking ad is ridiculous. It shows a complete lack of understanding, by a relatively well off white lady, towards the reality of life for First Nations peoples. It also shows a complete lack of understanding of Canadian history, the programs designed to force assimilation, the whole cultural genocide, the Residential school program, the fact that a Eurocentric system of governance and laws has been thrust on a population that didn't ask for it, etc. It shows a complete lack of understanding of treaties signed and promises made, which have often not been met anyway. Colonialism has been devastating to First Nations people in Canada. If there is a group in North America that can be described as oppressed, it is First Nations people.

But, hark, somehow, we white people, and seemingly specifically Tamara, are the victims it would seem. How dare Natives get what they were promised. How dare Natives get high on their horse as super citizens and get unfair advantages and "handouts" that white people don't, thrusting them into a position of power and influence, giving them dominance and control over oppressed white people. Oh, wait, that's because that doesn't happen. It's the whites who have all the dominance and control. Damn, I guess Tamara didn't get the Facebook message.

But, according to statements after she was criticized over this ad, she stands defiantly by them 100 percent and says that they are true. So, yes, apparently, Natives in Canada are the oppressors of the subjugated whites. And that's the truth, according to Tamara. Yes, she stands by that. Wow. At this point, can we say anything other than the fact that she is an idiot?

Now, I support her right to say these things, what with the whole free speech thing an all. Heck, in fact, I am more than glad she did run this ad. It shows how ridiculous and ignorant she truly is with a very racist agenda. In fact, it seems, based on this ad, that her entire agenda, her entire reason for running in the election was to stick it to the red man who has been oppressing whites for far too long. That appears to be about it. Her entire reason to run was based in racism! How pathetic is that! Imagine spending the time and money to try and get elected on a platform that seems based for the most part on hatred of an entire race. Why would you do that?? Has she been done horribly wrong or something? Has someone with brown skin caused her pain so she chooses to lash out in a knee jerk, random, stereotype driven way? What's the story here Tamara? I just don't get it. Well, wait, actually I do. Sadly, the rhetoric she uses is not all that uncommon in Thunder Bay, Northwestern Ontario, and here in my new home of Winnipeg. These worn out, tired and completely misguided stereotypes are repeated over and over when it comes to First Nations people.

Basically, what I am saying, is that racism is rampant, brazen, open and generally accepted, in a way that it would not be accepted against almost any other group, and it has been this way for as long as I can remember. It's a part of the culture. It's just the way at has been, though hopefully not the way it will always be. Tamara coming forth with this ad has done the public a favour in helping to bring to surface the terrible reality of racism, and with her statements, she drew out some of the worst examples of racists in the area that supported her, loving her message of sticking it to Natives. This saddens me. It sickens me in fact. But, I look at it and wonder if this can be a catalyst for change. Maybe more people will look at what she has said, and will start changing views by getting educated about how her views are based in stereotypes and misconceptions. I, too, am on this journey, to grow and understand the relationship between Canada and it's First Nations people, often having to plow through this kind of racist bile to get to the truth. I now recognize more than ever just how dangerous ideas put forth by people like Tamara Johnson are. She is a racist. There is no two ways about this. Racist to the core. A text book example. And, as being such, we can learn from her. We can learn the direction NOT to take. We can look at the pain that she has created, the shitstorm she brewed, and the way she handles herself, in such a divisive and egotistical way, as a self centered, self serving bully with an over abundance of confidence and a complete deficit of understand and say , "I don't want to be that! I want to be better than that!"
Manic Expressive at 4:29 AM
Share